The Great Britain Heritage ball hockey program is pleased to announce that Dick Price will join the organization as the Head Coach and Assistant General Manager of their Women’s entry into the World Ball Hockey Federation (WBHF) Championships.  The Women’s WBHF Championships were recently announced to be taking place June 12-17, 2018 in Moscow, Russia.

Dick Price has been involved in the sport of ball hockey for over two decades, and is the current owner and operator of the London Ball Hockey Association (LBHA).  Currently, Price runs the perennial powerhouse Outpatients Men’s team.  The Outpatients are one of LBHA’s premier teams and recently captured the Summer Season Tier 1 Championship.  “I’m excited to get involved with the Great Britain Heritage program,” said Price.  “The Men’s team took a lot of people by surprise at the 2017 tournament, and I believe we can build on that success with a very talented Women’s program.”

Team Great Britain Heritage turned heads at the 2017 WBHF Championships in the Czech Republic with a fourth-place finish, just missing out on a birth in the finals before falling to a well rested American team in the bronze medal game.  As a result, the program has expanded to include a Women’s 5-on-5, Men’s 3-on-3, and Men’s Masters 3-on-3 entry for 2018.  Team Great Britain Heritage Men’s Head Coach, Chad Asselstine said, “I’m very pleased to have Dick join Team Great Britain Heritage to not only lead our Women’s squad, but to also assist in the development of our entire program.  He has been integral in the growth of ball hockey in London, and I believe he’ll have an immediate impact.”

The Women’s Team will look to mirror the Men’s Team in their training camp, preparation, and in-game strategies with team specific modifications based on roster composition and strengths.  If you’re interested in trying out for the Women’s Program, you must submit an application, which can be found online: https://goo.gl/forms/64uguejjEKTybUoN2.

If you are interested in trying out for Team Britain Heritage please contact Dan Gilbert at 519 636 0138 or email [email protected]. 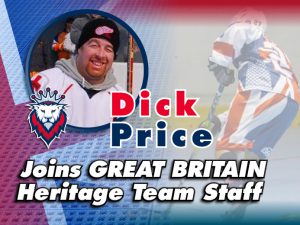